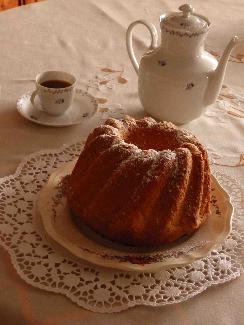 0
0 Review.
Time: 50 min
Prep: 2 hours
Cook: 50 min
Price:
Diff.:
Kougelhopf is a dry cake which originates from Alsace in France. It has a brown outside that is covered with icing sugar. The cake is often eaten together with coffee or tea, but can be served at breakfast as well. This is the traditional recipe of the cake with raisins, but other variations with almonds, or fruits can also be found.

Place the raisins in a bowl with warm water so they become soft.

Crumble the yeast in a bowl, add hundred milliliter of room temperature milk. Stir the yeast until it is lump free. Let the mixture rest fifteen minutes.

Pour the flour the eggs and hundred milliliter of milk in a bowl and mix together.

Cut the soft butter in small pieces and add it in the bowl with the flour, and mix well.

Add the yeast mixture in the flour mix, and work the dough a few minutes until it let go from the edges of the bowl.

Cover the bowl with a baking towel, and let it rest in the oven without heat for one hour.

Take out the dough from the oven and add the raisins and mix it one more time.

Place the almond flakes in the bottom of the both kougelhopf forms.

Divide the dough in two and place them in the two baking forms.

Let the dough rest in the forms until the dough grow so much so it reach the top of the forms.

Preheat the oven with electrical heat at 200 degrees Celsius.

Place the kougelhopf form in the middle of the oven for fifty minutes.

Take out the cakes from the oven and turn them upside down on the oven grill on a bench.

Before serving the cakes sprinkle them with the icing sugar.
A selection of recipes from the same country.
This recipe is from France , Alsace.

Gougères - French cheese bread
Homemade French Gougères can be made commonly with gruyère, comté, or emmentaler cheese. This recipe is made with Comté cheese and make the bread very soft and fluffy. The bread can be served as a starter, appetizer or for a late Sunday brunch.

Galette des-Rois
French cake that is served on the 6th of January. The person who gets the figure will be king or queen of the day.

Hazelnut pie
This typical Alsatian homemade hazelnut pie has a thick and crusty pie bottom and needs to rest over the night to get the right consistence. This pie is a good idea as a dessert to end an Alsatian evening after some tarte flambées (which you can also find on this webpage).
MyCookingPlace.com, your favorite place to share your homemade recipes, and find inspiration for easy and homemade recipes from around the world.

View Recipes
Convert your values here !
F° | C°
Gr | Oz
Cup | Ml
Fahrenheit
Celsius
Gram
Ounce
Cup
Milliliter
Translate
Translation
Below you can chose which language you would like to have the page translated to,