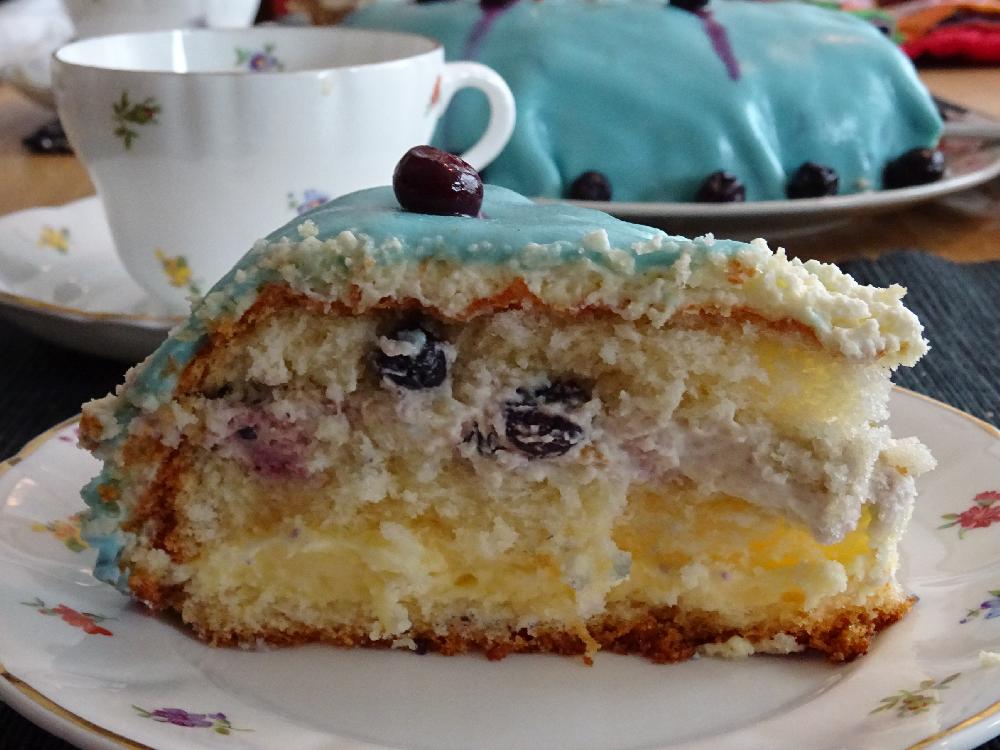 3.6
12 Reviews.
Time: 20 min
Prep: 40 min
Cook: 40 min
Price:
Diff.:
This Swedish prince cake is another version of the famous princess cake. It is a homemade blueberry cake which is a hit at any birthday parties in the autumn when it is high season for blueberries. It is a creamy cake with a blueberry and white chocolate filling, topped with a layer of marzipan.

Preheat the oven at 180 degrees Celsius.

Spread the margarine on the bottom and edges on a baking form with removable edges. Spread the bread crumbles evenly in the form.

With an electrical mixer whip the sugar and the eggs together so it becomes white and fluffy.

While stirring add the potato flour, baking powder, and the gluten free flour.

Pour it in the baking form, and place it on the lower part of the oven for 40 minutes.

Take out the cake and let it become cold, then divide it in 3 layers.

If you use powder vanilla cream prepare it according to the instructions on the box. If you use bought one from the store you don't need to prepare it.

With an electrical mixer whip the whipping cream and the vanilla sugar in to a hard foam, it should resembles shaving cream in the consistence.

Mix 2/3 of the blueberries together with 1/3 of the vanilla cream, ½ of the white chocolate, and ½ of the whip cream.

In another bowl mix 2/3 of the vanilla cream and ¼ of the whip cream together.

In another bowl mix ¼ of the whip cream and ½ of the chocolate together.

Place the bottom layer of the cake on a plate and spread evenly the vanilla and whip cream mixture on top.

Place the middle layer of the cake on top and spread evenly the mixture with blueberries, vanilla cream, whip cream and chocolate evenly on it.

Place the top layer on top and spread evenly the mixture with the whip cream and chocolate on it.

Place the marzipan lid on top and decorate with the rest of the blueberries.

A selection of recipes from the same country.
This recipe is from Sweden 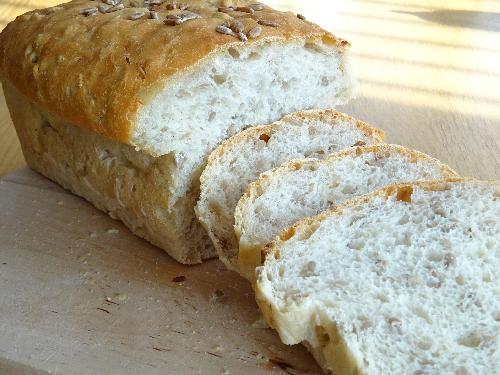 White bread with sunflower seeds
With this recipe you will get a wonderful bread with a crusty surface and a fluffy and soft middle. It is easy and quick to prepare, only takes a few minutes of work. It is a good idea to make this homemade bread for your Sunday brunch. 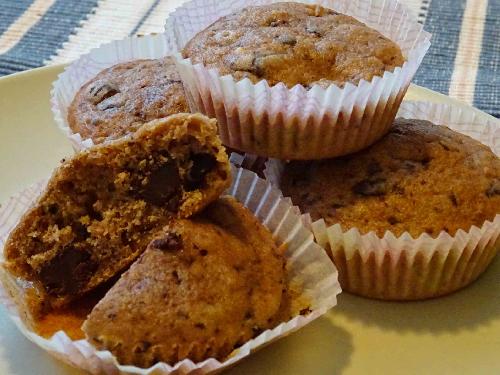 Banana and chocolate  mini muffins
These tasteful mini muffins are fun to do and turns out perfect every time thanks to the bananas. They have a moist texture so you can keep them a few days without getting dry. You can choose to serve the muffins as a weekend breakfast, as a after school treat or why not eat them together with a cup of coffee. 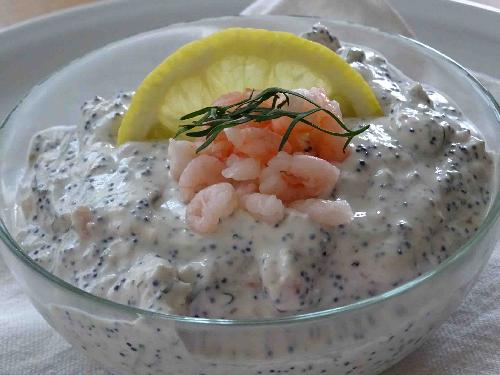 Swedish shrimp salad (Skagenröra)
A homemade classical Swedish shrimp salad also called skagenröra. This is a typical summer delight and taste best with fresh shrimps. It is mostly served as a starter on a toast, but also a favorite to baked potatoes, or as a filling in a baguette. The salad is named after the Danish town Skagen, furthest north in Denmark.
MyCookingPlace.com, your favorite place to share your homemade recipes, and find inspiration for easy and homemade recipes from around the world.